One school One Book Schooled 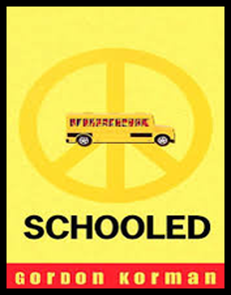 In the book Schooled by Gordan Korman, join Capricorn Anderson on an adventure in the modern day world. For the third year in a row WMS and LMS read the same book at the same time in the month of January.  This program, called One School One Book, is meant to connect the students, faculty and staff members within the school community to share the love of reading. Everyone was given a free copy of the book and a pacing calendar, then each week there were trivia questions and prizes to entice readers to stay on track with the novel. Here’s a summary and a review of the book just in case you didn’t get a chance to read it with us.
Capricorn Anderson along with his grandmother Rain are part of a community named Garland Farm. Garland Farm is a community that is stuck in the 80’s and their best invention is duct tape.

After Rain suffers a fall that breaks her hip, Cap is forced to go and live with Mrs. Donnelly and her daughter, Sophie. Mrs. Donnelly was a former resident of Garland Farm’s when she was younger and really takes a shine to Cap. Sophie on the other hand, hates Cap right off the bat. Whenever Cap would do ---- on the lawn, she would pour a bucket of water on him. She even called him a hobo when she saw him cleaning his feet of on their lawn.

School was even worse than his home. When he arrived at his temporary school, Claverage Middle School (informally known as C Average Middle School), he became an instant target for bullying. Zach Powers, the biggest bully in Claverage, nominated him for eighth grade president. Eighth grade president in this school is not a good position. In Claverage, the president is the most targeted student. Not long after Cap arrives, he saves the life of a bus driver after he has a heart attack, turning Cap from a zero to a hero.
With Cap not knowing what to do, he gets put in charge of the school’s Halloween Dance. Sophie’s dad comes and visits Sophie with a bracelet, which he had promised to put an inscription on. When her dad leaves with the bracelet with him, she is devastated. Cap sees this and buys a bracelet like the one that Sophie’s dad bought and put the inscription, “All you need is love on it.”

Cap then, through a series of luck and coincidences, teaches people how to tie-dye shirts or other objects, starts a Tai-Chi class, and teaches 60’s style music. Eventually, Hugh Winkleman, Cap’s first best friend, betrays him by teaming up with Zach Powers. The plan was to put him in a Rhinecliff jersey and to have the entire football team tackle him. Sure enough, the plan worked, leaving Cap hurt and needing help to even get off the field. Darryl Pennyfield, the first of the football players to tackle Cap, was devastated after realizing how hurt Cap was.  Darryl knew that Zach had put Cap up to it, questioned Zach in the hallway. Zach played dumb, which angered Darryl. Darryl became so mad that he took a swing at Zach. His fist connected with someone, but not Zach. Cap had run in between them and blocked the punch, knocking him out cold.

Cap was knocked out and an ambulance had to be called to take him. On his ride in the ambulance, he was informed that Rain has fully recovered. Mr.Kasigi returns from a trip to find a bill on his desk about the school’s banking account, which was completely drained of all funds. He calls Mrs. Donnelly to figure out what the checks were spent on. They discover that all of the fund had gone into charity. All except for the funds for the bracelet, which Mrs. Donnelly said, “Must have been a good reason,” even though she knew that the money was for the bracelet for Sophie. The students of Claverage, heard a rumor that Cap had died. They also heard that the Halloween Dance was canceled after Cap’s injuries.
​
They decided that instead of having a Halloween Dance, that they should hold a memorial for Cap. Cap hears from Sophie about the memorial and shows up in a Mickey Mouse costume. He then informed everyone, after climbing onto the “stage” that he was fine and then proceeded to say bye to all 1000 student by name. Cap returns to Garland Farms and gets arrested again while driving the same pickup truck on the same road. When Cap meets up with Rain again, she is driving a Mercedes. She informs Cap that she sold Garland Farms to a development company for 17 million dollars. This was a great ending for this great novel. Hope you enjoyed it as much as I did. Happy reading!  This book is BL 4.9 and is worth  AR points 6. 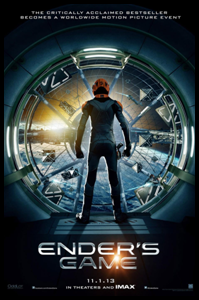 A few of you may be familiar with the movie Ender's Game that came out in 2013. Did you know that it was also a book? Yes indeed, Ender's Game is a three hundred and eighty four page military science fiction novel by Orson Scott Card. Ender's Game takes place in the future, where there have been two conflicts with insectoid alien species called formics (also frequently called Buggers).

A battle school monitors children, selecting few who they hope, with proper training, will be able to lead and command the attacks against the formics. The story follows a boy by the name of Andrew “Ender” Wiggin. Ender has to face challenges throughout this so called ‘Battle School’, such as different ranks and ‘armies’ that battle each other in Zero-G (no gravity) environments. Ender has to deal with older children attendees and many problems, such as he might just be promoted to Command School in which - if he passes the simulations - he might be able to battle the Buggers The book is very interesting, but tends to be a bit lengthy. It is book level 5.7 and 17 AR points!

It’s a great way for you to either get into Science Fiction, or to continue fantasizing over the genre on a more advanced level. The book can be a bit confusing at parts. I highly recommend reading it, however you should take your time and reread the pages as much as you feel suitable. You really shouldn’t just rush through this book. It’s better to take your time, savor the ingenuousness of the book, and appreciate the beauty of Orson Scott Card’s masterpiece.

The movie Ender's Game is rated PG-13, mostly for violence but there is a little bit of profanity. There are some unpleasant parts in the movie so be warned. The movie skips some of the events in Battle School, but it does a good job of keeping with the story line. I certainly recommend reading the book before watching the movie. Of course it is hard to imagine what the future looks like, so the movie helps you picture it.

I believe both the movie and book are amazing. If you read Ender's Game and are interested, you can continue reading the rest of the series! After Ender's Game are Speaker for the Dead, then Xenocide, and more!

World's End: The sequel to Dormia 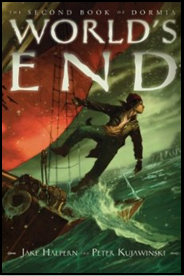 Once I saw World’s End on the library shelves, I had to get it. I had already read Dormia, the  prequel, and it was very good. I looked it up on Destiny, the school’s library catalog. It was a 6.0 reading level and 19 AR points! Once I opened the book I was almost immediately entranced in the wonderful world of Dormia.

Alfonso, now 15 years old, hasn’t done anything odd in his sleep lately. Usually, he sleepwalks into a tree with a nest of falcons, or some other weird place. He has woken up in his bed and not in a sticky situation for a long time.

Bilblox, his most trusted blind friend, flies his plane over to Alfonso after getting a call from him to take him to Dormia. After crash landing Bilblox’s plane in the Alps, his uncle escorts him to Somnos, the only city in Dormia that was not destroyed. After having strange dreams about his father, he goes underground in search for the entrance to Jasber. Jasber was the first founded city of Dormia, and later secluded itself from the rest of Dormia after a war. They created the Jasber Gate.

Kiril, the main antagonist, is up to no good, though. He will go to extreme measures to make sure Alfonso does not find his father. Can Alfonso find his father and stop Kiril?
This book ends on a cliffhanger that I was disappointed with. The events take place in the end don’t seem to fit with the rest of the story. Even the Epilogue didn’t give much information on what happened next. Hopefully the third book will answer my questions.