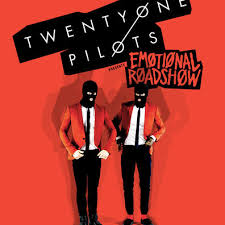 An obscure band that started out in Columbus, Ohio is now touring the world. This musical duo goes by the name of Twenty One Pilots. The band makes a wide variety of music that fits into several genres. Twenty One Pilots has four albums in total and is signed with American record label, Fueled By Ramen. This band has made a recent breakthrough in 2014 and has been making their way up the charts with their well known song, “Stressed Out” and their newest album, “Blurryface.”

The Ohio band started out in 2009 with lead singer Tyler Joseph and his college friends, Nick Thomas and Chris Salih. Tyler got the idea of the band’s name after studying a play about a family’s inspiring dilemma during World War II including a death of 21 pilots.
On December 29, 2009, the band self-released their first album, Twenty One Pilots, and started touring the state of Ohio. Then, during 2011, Tyler’s bandmates left the band due to busy schedules and were later replaced by Josh Dun, who was the former live drummer for the band, House of Heroes. After Josh joined the band the two friends released an album on July 8, 2011 called, “Regional at Best.” Later that year Twenty One Pilots performed at a sold out show in Columbus, Ohio. This grabbed the attention of many record labels. The bandmates finally came to the decision of signing with American record label, Fueled by Ramen. After signing with the label, the band released their first full-length album on January 8, 2013 and is known as, “Vessel.” This album reached No. 58 on the Billboard 200 and No.10 on the Alternative Albums Chart.

In May 2013, the band Fall Out Boy announced that Twenty One Pilots would be touring with them as the opening act the following fall. This lead the band to become even more well known as they went on tour. Eventually, in 2014, the band made their breakthrough into the mainstream. They attended music festivals and other worldwide events. As a result, some cities offered the band a show, which lead them to the Quiet Is Violent Tour, starting in September.

The third single on their most recent album, “Blurryface” reached No. 2 on the Billboard 200 and number one on both Alternative Songs and Hot Rock Songs. This song called, “Stressed Out” has been heard all over the radio and quickly made the band gain thousands of fans from all over the world. The song is one of many that is relatable to many fans. It talks about the hard parts about growing up and a character named, “Blurryface” which represents all of the insecurities.
​
Some of the genres the band is put into are, alternative hip hop, electropop, indie pop, rap and rock. The band is a mix of piano, electronic keyboard, synthesizer, drums, vocals, and sometimes the ukulele. The songs by Twenty One Pilots are poetry based, written by both Tyler Joseph and Josh Dun. 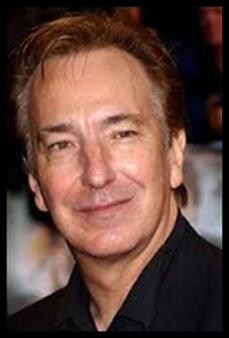 Alan Rickman was born on February 21st, 1946, in West London, England. You may know him as the character Severus Snape in the Harry Potter movies, however, Rickman was a wonderful actor in several other projects. He was a stage actor as well. At the age of twenty-six, Rickman applied to the Royal Academy of Dramatic Art, finally beginning to pursue the career. He had  dreamed of being an actor since age seven. He studied graphic design and showed a strong interest in art while in college. For his first major Hollywood role was he was cast as the villain Hans Gruber in the movie, Die Hard.


Despite being such an amazing villain, Rickman did not appreciate such roles. He wanted his audience to know that he was merely acting and didn’t want to just be known for playing an antagonist. Apart from being an actor he was also a co-writer and director. Rickman has been acting for quite a while in a large variety of roles and is proudly considered one of England’s best actors.


His acting career spanned from 1978 to 2016. In terms of personal life he had three siblings and was married in 2012 to Rima Horton. Unfortunately, Alan Rickman died on January 14th, 2016 when was 68 years of age. His death was a tragic misfortune which occurred because he was a victim of pancreatic cancer. Alan Rickman will forever remain in our hearts as a talented actor and a wonderful human being.

David Bowie, his music his legend 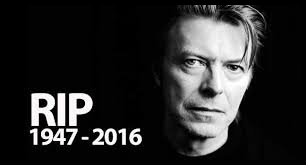 On January 10th, David Bowie died of Liver disease. David Bowie was a British musician and artist. He was famous for his songs like “China Girl,” and “Ashes to Ashes.” He was known for his odd music videos and his made up character Ziggy Stardust. Bowie made an impact in pop music and the world. Bowie was born in South London, England in 1942. He took an early interest in music, and studied music, art, and design in school. He first began to make music in 1963, but not much of his early music is well known. He started to earn popularity after his first hit,”Space Oddity,” in 1969.

Over the next three years, Bowie slowed down his music production, and started experimenting with new sounds. In 1972, he re emerged in the glam rock era of music as Ziggy Stardust, a colorful character with a red lightning strike painted on his face. His album, ¨The Rise and Fall of Ziggy Stardust and the Spiders from Mars,¨ along with his single, ¨Starman,¨ spent over three months on the charts.
In 1973, David Bowie broke up with his band, Ziggy Stardust and the Spiders From Mars. He decided to stop using the Ziggy Stardust character altogether. The next year, he moved to the US. In the US, he launched hits such as ¨Rebel Rebel,¨ ¨Diamond Dogs,¨ and ¨Fame.¨ ¨Fame¨ was criticized at first for the different genre of music, which he called, ¨Plastic Soul.¨

David Bowie went through many periods of music. In 1980, he started writing more romantic songs. This is known as his Romantic Period. It lasted until 1988. During this period, he teamed up with the band Queen and wrote the song, ¨Under Pressure.¨ The next period he went through was called the Electronic period, which started in 1992. He only had one big hit during this time, ¨The Buddha of Suburbia.¨ Although he only had one big hit at the time, he was inducted into the Rock and Roll Hall of Fame.
From 1998 to 2012, David toured more often, and did not write as much music. In 2004, David Bowie suffered a heart attack, but recovered quickly. In 2006, he received the Lifetime Achievement Award. Later that year, he announced that he would be taking a year off.