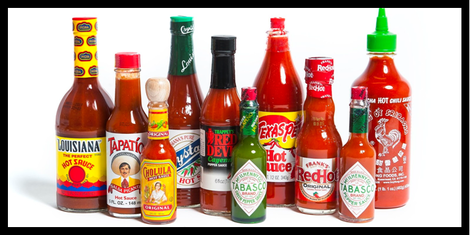 Have you ever wondered how much heat your food has? When I say heat, I mean how spicy a food is. Chemist Wilbur Scoville invented the Scoville Organoleptic Scale which measures the “heat” of a food item. He was born in Bridgeport, Connecticut on January 22nd,1865 and died in Gainesville, Florida on March10th, 1942. Scoville invented the scale as part of an effort to improve the production of Heet liniment, cream used in the treatment of minor aches and pains. The active ingredient in Heet was capsaicin, which is what makes peppers spicy.

An average bottle of Tabasco sauce measures at 2,500 to 5,000 Scoville Units. Scoville Heat Units (or SHU for short) is the modern name for this scale. If Tabasco sauce is very spicy for you then you might not be able to handle something even spicier.  Want to know what the hottest pepper is? The hottest pepper ever recorded is the Carolina Reaper, measuring in at a whooping 2,200,000 Scoville Units. The first breeder was Ed “Smokin” Currie. He was presented the title of ‘hottest pepper’ by the Guinness Book of Records at the Annual New York City Hot Sauce Expo. There was also an eating competition the same day to see who could eat 3 Carolina Reapers the fastest. Russel Todd claimed the record that day with 12.23 seconds, but got beaten 6 months later by Jason McNabb with a time of 10.95 seconds.
​
Do you know someone who has attempted the “Ghost Pepper Challenge”? For this “challenge” you must eat Bhut jolokia, or the Ghost Pepper. It measures at 1,050,000 SHU and ranked 7th on the list of the world’s hottest peppers. Be warned when eating spicy foods because certain amounts of spice can be deadly to people. If you choose to attempt to eat any of these spicy foods, please use milk instead of water. Water will only make the intensity of the spice.  Next time you order hot buffalo wings, you can try different degrees of ‘hotness’ to see what you can tolerate!

This past fall I began my first year of high school as a freshman at Lyman Hall High School in Wallingford, Connecticut.  I am in the Agricultural Mechanics program where I am learning all kinds of new skills in the agricultural field, including plant science, welding, and engine repair.  So far high school has been fun, but there a few new responsibilities that I need to take care of on my own.  I get to pick the classes that I want to take and it is my responsibility to get to all of them on time, otherwise you can get a detention from your teacher. Getting to and from your classes is your responsibility and not the teachers.  The classes in high school are longer too and you get more homework.  My classes are 85 minutes long and I have 3-4 homework assignment that I have to complete daily.

One of the fun things about high school is you get more independence.  You are allowed to move around the school on your own and this includes lunch period where you can choose where you sit and who you eat with.  High school has many clubs that you can join.  I joined Future Farmers of America.  Another thing I like about high school is that I have made many new friends from many different towns.  So far high school has been a blast and I am enjoying every minute of it.

How to protect yourself from frostbite 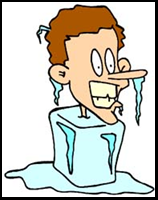 Frostbite is an issue during the winter. It is a condition where your skin and tissue just below the skin freezes after you’ve been outside in the cold for too long. It may seem very common, but it’s only a rare issue. In the US there's an average of 20,000 to 200,000 cases each year.
Frostbite is most common on the fingers, toes, nose, ears, cheeks, or any place where there is low blood flow. Due to the numbness, you may not realize you have it, until someone else points it out. If you do happen to have frostbite you can tell by your symptoms. First, you’ll have cold skin and a prickling feeling. Then you’ll have numbness along with red, white, bluish-white or waxy yellow skin. A bad case of frostbite means you could develop joint and muscle stiffness which could lead to clumsiness. Finally, in severe cases, you can have blistering skin after rewarming it, infections, or even nerve damage.
There are three stages of frostbite. The first stage of frostbite is frostnip. In this first stage you'll experience a cold feeling followed by redness in the skin. It will irritate the skin, but it won’t permanently damage it. The second stage of frostbite is called superficial frostbite. This occurs when you start to feel warm. Fluid-filled blisters might appear after 24-36 hours of rewarming your body. The third stage is called deep frostbite. Signs that indicate deep frostbite  include: joints and muscles that won’t respond, numbness, large blisters, and the affected area turning black and hard. That means that your tissue is dying.
There are ways to prevent getting frostbite. Wear appropriate clothing for rain or snow such as a jacket, hat, gloves and warmer clothing in layers. When you’re in the cold, wet, or windy weather, make sure you limit your time outdoors. It only takes 30 minutes when temperatures are below 0 to lower your body temperature and risk frostbite, but you can still get frostbite within a minute when temperatures are extremely cold. Take care when you are outside and watch for signs of beginning frostbite.